Author: Brian McConnell,Â history enthusiast, re-enactor, descendant of a Loyalist soldier in the American Revolution, and member of the United Empire Loyalists’ Association of Canada.Â You can see Brian’sÂ original writing (with more photos) on his website hereÂ where you can also download the pdf. 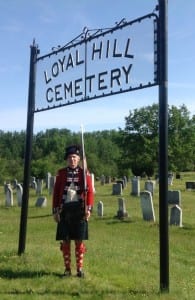 At the Loyal Hill Cemetery is a monument placed there in remembrance of Captain John Grant by his descendants. The area where Loyal Hill is located was also in the past known as the â€˜Man of War Landsâ€™. It was part of a land grant first made by King George III on April 9, 1761 to Royal Navy Captains who participated in the sieges of Louisbourg and Quebec. (2) In 1783, as the original grantees did not live up to their obligations, it was escheated and taken back by the Crown. It was then granted to United Empire Loyalists, most notably Captain John Grant.

John Grant was born in Strathspey, Scotland, in Grant-town in 1729, son of Alexander Grant. His motherâ€™s name and the names of brothers or sisters he may have had are unknown. According to a history of his life written by a descendant he was accepted into the army, the Black Watch, at an unusually young age, shortly before his 13th birthday.(3) The Black Watch that acted as a keeping the peace or police force in the highlands of Scotland was formed into the 43rd Regiment of the British Army in May 1740 and was composed of men from several highland clans, including the Grants. In 1749, as a result of the end of service of the 42nd, or Ogleghorpeâ€™s Regiment, which had been raised for colonial service in North America, the number of the Highland Regiment was altered from 43rd to the 42nd. (4) The uniform consisted of the belted Black Watch tartan with a scarlet jacket and waistcoat. A blue bonnet was worn with a border of red, white and green squares, and a tuft of feathers or a small piece of black bearskin. The kit also included musket, bayonet, and broadsword.

The Black Watch sailed from England to Flanders in 1743 with John Grant as a Lieutenant and his regiment took a prominent part at the Battle of Fontenay (5) A French author of a pamphlet published in Paris immediately after the Battle, referring to the soldiers of the Black Watch as â€˜ Highland furiesâ€™, wrote as follows:

â€œ The British behaved well, and could be exceeded in ardour by none but our officers, who animated the troops by their example, when the Highland furies rushed in upon us with more ardour and violence than ever did a sea driven by tempest…â€ (6)

The Duke of Cumberland, commander of the British army at Fontenay, indicated to the Black Watch that he would grant them any favour in his power, in testimony of the high opinion he had formed of their conduct during the Battle. The men asked for pardon for a soldier of the regiment who had been tried by court-martial for allowing a prisoner to escape and who was under sentence of heavy corporal punishment, which if inflicted would bring disgrace to the regiment, as well as his family. The favour was granted.

When the regiment returned in 1748 from France it was sent to Ireland for eight years. From there it sailed to America arriving at New York in June, 1756. Grant saw service during the Seven Yearsâ€™ War and was in the 1758 Battle of Fort Ticonderoga against the French where he was wounded. The regiment suffered terrible losses in the Battle. Eight of its officers, nine sergeants, and 297 men were killed and 17 officers, 10 sergeants, and 306 men were wounded. At a total strength of 647 officers and men it had been reduced almost to a skeleton.

It is recorded that by early in 1759 John Grant had recovered from his wounds at Ticonderoga and served with his Regiment at the Battle of Quebec under General James Wolfe.(6) Later in the year he was back in New York and on August 30, 1759 married Sarah Bergen. She was the daughter of Meighail (Michael) and Catylyntie Bergen and descended from a Norwegian shipbuilder who had settled at Brooklyn, Long Island. John Grant was now 30 years of age and retired from the Black Watch while Sarah was just 16 and had been given by her father a farm of 150 acres near Jamaica, Queenâ€™s County, Long Island. The couple lived there until April 1762 when John resumed his military career as a Captain in the 2 New York Regiment of Foot. On April 19, 1762 the colonial government issued a warrant in favour of Captain John Grant, for 957 pounds, bounty and enlisting money for 87 volunteers, of the counties of Kings and Queens.(7)

In August 1763 Captain Grant was appointed to take command of a company raised to protect the colonists and keep communications open between Albany, N.Y and certain outposts. The following year he marched his company from New York city to Fort Horkimer on the Mohawk River. There he saw action and was wounded several times. In later years when his body was prepared for burial no less than seven sword or bullet woods were visible. For his military service he received a grant of 3,000 acres of valuable land midway between the head of Lake George and the fort at Crown Point.

Although at the beginning of the American Revolution Grantâ€™s father-in-law had asked for British protection, he and his family were strong in their attachment to the rebels. They tried to persuade John Grant to assume command of a regiment in the services of the American Congress. He viewed such a proposition with disdain and was forced to flee when his home was wrecked. He escaped to the West Indies leaving his wife and five children, Michael, Catherine, Rachel, Letitia, and Sarah, in the care of the Bergens.

After spending 18 months in the south, Grant learned that General Sir William Howe was in command of British troops on Staten Island, N.Y and he offered his services. He was appointed as Guide and given charge of the vanguard of the left column on the landing of the British on Long Island on August 27, 1776. During that year Grantâ€™s son Stephen was born and two years later his seventh and last child, Ann.

During the conflict of the American Revolution John Grant and his family lost most of their material belongings. His original home was burned to the ground. When he was absent in the West Indies his wife moved house to Hackensack, New Jersey and took with her the best furniture, silver and dishes, along with the familyâ€™s best wearing apparel and the Captainâ€™s valuable papers. However, there again everything was plundered and destroyed. The family farm at Jamaica, Long Island was also destroyed. Its hay and grain were either burned or confiscated by the rebels and 31 head of cattle and four horses seized. The total losses were estimated at five thousand pounds. When the war ended Grant realized that to remain in New York Province after the evacuation of British forces would likely be fatal.

In 1783 Grant left his family in New York and sailed on the Her Majestyâ€™s. ship â€œBerwickâ€ to Halifax, Nova Scotia, arriving on July 1 . He visited Shelburne to see if he could obtain a grant st of land there but was unsuccessful. Returning to New York he was advised he would be granted lands on the Hants shore in Nova Scotia in the Township of Newport and amounting to 3,000 acres. With his family he sailed on October 16 on the transport â€œStaffordâ€ to Halifax, arriving th 10 days later. They traveled from there overland to Windsor and arrived on May 23, 1784 at their new home which he called â€˜Loyal Hillâ€™.

Traveling with Captain Grant to Nova Scotia were his wife Sarah, and six of their seven children. Michael, the eldest who was nearly 20, remained in New York with his Bergen grandparents to complete his education. He joined the family four years later. They also brought with them black slaves by the names of Sam, Nance, Pompy, Fillis, Tom, Maso, Harry, and Betsy. The custom of bringing slaves as servants was common at the time.

Grant supervised the building of new homes at Loyal Hill. The slaves were provided with a house of their own. The old cellars are the only remaining signs of these homes nowadays. They are grass-grown depressions half filled with stones.

In 1790, Captain John Grant passed away from illness resulting from previous wounds and exposure. It has been noted by historian T. Watson Smith that â€œAfter the fashion of the time his body was interred in his own grounds, but some years since, owing to the encroachments of a quarry, the bones were removed to a granite monument erected in the burying ground of the Baptist Church in the neighborhood. The wife, whom faithfulness to her vow, to â€œkeep thee only unto himâ€, involved so much unforseen sorrow, ending in exile from all her kindred, survived him some years, dying in 1808.â€(8)

After his fatherâ€™s death, Michael Bergen Grant took charge of Loyal Hill and later married Sophia Nutting, daughter of another United Empire Loyalist, Captain John Nutting, who had served with the Royal Engineers. Nutting had been granted a large tract of land near that of Captain Grant.

Notes: * This article was prepared by Brian McConnell UE on October 9, 2015. To contact him please emailÂ here.